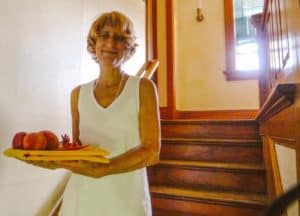 Our friend Bonnie Jo showed up at Kashi House in the spring of 2014. She fell instantly in love with Anandamayi Ma, with our teacher Shambhavi and with the entire Jaya Kula community. She was initiated that summer, cured of Hep C in the fall and diagnosed with liver cancer in April of 2015.

As any of us would, she tried hard to survive. There was chemo, then radical liver surgery, then rehab. In late August, she learned that the cancer had returned with a vengeance, and she began preparing to die.

We didn’t have a lot of time with Bonnie. Some of us in our West coast community and elsewhere outside of Maine never even met her, but she made an imprint on this community. Her death has affected us collectively and deeply. She is our first to go.

I have managed to reach the age of 49 without getting up close with death. For many of Bonnie’s other friends, her dying from cancer was also a first.

This is death, I kept telling myself as Bonnie slipped farther away. Take a good hard look.

Bonnie hated to die. She’d just found a teacher, a spiritual path and a community. Many of her 66 years had been a restless pleasure-seeking blur. I remember one Satsang a few months ago when we all talked about what we most deeply longed for. Bonnie expressed a yearning to find out what lay behind her fantasies and projections.

You could say Bonnie died too soon, before she had a chance to do much sadhana. But I can’t hold that view. Our teacher, Shambhavi, has said many times that whatever we’re being served is the perfect meal for us. Bonnie’s illness was the perfect meal. It showed her what was behind one of her most entrenched karmic fantasies—the idea that she was alone and unworthy. 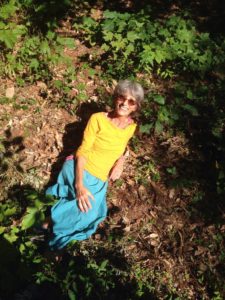 Bonnie’s death was the opposite of separate and alone. She couldn’t get over all the love that surrounded her in her final months, weeks and days. Friends were with her every moment. Her daughter slept next to her. Everyone chanted her mantra, stroking her hands.

I think she may have hung on a little longer than any of us thought possible just to soak it in some more. I pray that in her next life she doesn’t have to wait so long to know she is loved.

I have that Hungry Ghost thing, too—a feeling of not being able or willing to take in enough nourishment to fill a sometimes gaping sense of lack and disappointment. Bonnie’s death affected me in so many different ways, but mostly it has shown me that separateness is just not possible. Ok, yes, we have a real experience of it, but it’s not what is happening here.

Instead of loss, what I am left feeling is a fuller, deeper understanding of how spiritual community functions and how it nourishes. And how the bittersweet quality of things coming and going is part of that nourishment.

Dying, among other things, often means not getting what you think you want.

Bonnie was attached to the idea of dying at home in her room, tended by friends in familiar surroundings. Although her friends were willing, providing round-the-clock home support quickly became enormously taxing.

A couple of weeks before she died, Shambhavi met with Bonnie and urged her to move to a hospice facility. This is going to get a lot harder, she said, and transferring to hospice is the compassionate thing to do for your friends.

By this point Bonnie was having a difficult time tracking conversations and making decisions, but she listened and followed. In hospice, she immediately became more relaxed and able to just be with people and feel nourished. It was moving to see her letting go with so little time left.

Later, one of Bonnie’s close friends spoke up in satsang, saying that Shambhavi’s intervention had taught her a lot about the real meaning of community. She had been suffering, she said, wanting to honor Bonnie’s request but feeling overwhelmed. She now saw that going along with a friend’s fantasy, while it might have seemed kind, was actually not serving anyone. Real love and compassion requires us to look at what is, not at what our stubborn concepts tell us.

When I look at death through the stubborn concept lens, I feel a lot of resistance and anger. I don’t want to die. I don’t want the people I love to die. It feels brutal that we have this experience of being alive in this place, of being these complexly embodied individuals. Then we have to say goodbye forever to everybody. It’s stupid!

And yet…being there for Bonnie’s death, trying to see it for what it really is, I felt and still feel equal parts fear and awe. We are not in charge here. We don’t get to make the rules. Yet wisdom has a perfect plan. Something gives me confidence that this is as true of every death as it was of Bonnie’s.

By perfect I don’t mean pretty. Dying of liver cancer is arduous. Bonnie was heavily medicated for pain. Finally she stopped eating and fell into a coma. Every time I came to see her, her skin looked more yellow and shrunken. Her body emitted a strong sour odor.

On the one hand, the process of dying seemed completely natural. On the other hand, it was shocking. It was difficult to witness, but it was also beautiful.

In the mornings at the hospice, we’d move Bonnie’s bed so that the sun fell on her face. The trees outside her window were turning red and gold. There was nothing to do except attend to her and to each other.

One evening I walked in to find Bonnie surrounded with Kula chanting Om Namo Narayani, her mantra. I joined in. After a while we fell silent and sat with our hands on her feet, her chest, her shoulders. Her last few days and her burial were full of moments such as this, the sweetness inextricably mixed with sadness.

On Friday, October 9, Bonnie took a final sip of air and stopped breathing. Her body quickly turned cold and rigid. We oiled her with sandalwood, wrapped her in a saffron shroud, tied her with twine and covered her with flowers. The body was like a block of wood. Bonnie wasn’t there anymore. This will be all of us, sooner or later.

Watching Bonnie die, I realized how strong the illusion is that we are our bodies. I relate to people’s bodies—their eyes, their voices, their mannerisms—as if the body were the person. I relate to myself that way, too. Even while I feel my heart extend out, there is still a definite sense of being this body. We tended to Bonnie as if she were that body. And then she wasn’t there anymore.

For the last few days, I’ve been looking at everyone and seeing the death face. It doesn’t feel morbid, just real. It’s what’s happening—and on some level, the teachings tell us, not happening. We are our bodies and we are not our bodies. When we really get it that our essence is continuous with God’s, impermanence and permanence will co-exist in our experience.

I’ve been holding onto the idea that death is not happening, or at least not for a long time yet—because I’m youngish, because I’m healthy, because I wear my seatbelt, because I eat organic food, and so on. Even today I caught myself beginning a sentence, “If I die….”

One result of Bonnie’s illness and death is that her mantra is now firmly implanted in the hearts of everyone who spent time at her bedside. As we lowered her body into the grave at Cedar Brook, everyone sang her mantra.

Bonnie’s mantra reminded her that we are never separate. We are always with the divine Mother. If nothing else, Bonnie’s death has given us all the opportunity to feel this reality more deeply. She is gone in that form, but her mantra and its effects remain.

Bonnie was an only child. Her parents were not awful, but they weren’t especially loving and encouraging, either. She loved her daughter very much but they had been distant for some time. She had many friends, but felt alone. In the last weeks of her life, she realized that she was deeply loved and cared for.

Here is what’s beginning to sink in for me: we are less singular persons and more patterns of aware, alive, communicative energy. This energy ripples out and continues. We are Bonnie’s family not just because she was a beloved member of our community. We are her family because we are continuous with her.

Through Bonnie’s death, Jaya Kula’s first but not our last, I feel Ma speaking to all of us. I feel we are growing closer to embodying what Jaya Kula, Victory Family, really means. 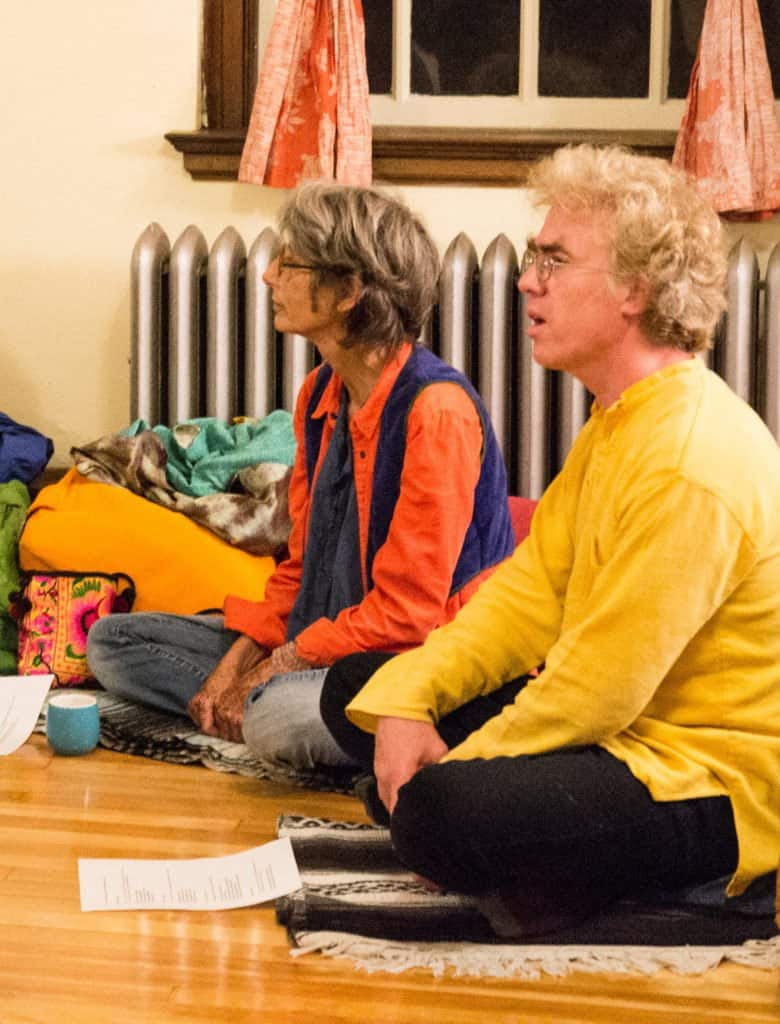 Bonnie and a friend at a Jaya Kula kirtan, two weeks before her death.