Entering the Bardo of Death

“Entering the Bardo of Death” was written by Jaya Kula student Grace Beber.

An experience of the dissolution of the five elements

According to Tantra and Ayurveda, when we die, we go through a process of reverse manifestation. The five elements and the functions they govern withdraw in stages that are the reverse of how they appeared when we were being created. Earth element withdraws into water. Water withdraws into fire. Fire withdraws into air, and air dissolves into space. This post has been contributed by Grace, a student of Jaya Kula. It movingly describes the passing of Grace’s sister through the lens of the dissolution of the five elements.

My sister died last month. She was diagnosed with breast cancer about five years ago. Last summer it metastasized to her liver. She lived another 15 months with Stage IV cancer.

During the last months, she was in constant pain. The drugs for pain made her even sicker. The cancer had taken over the majority of her liver.

Even as she worked so hard to live this past year, I noticed the slow dissolution of the elements occurring as the pain, dizziness, fatigue and many other symptoms increased. As life began to leave my sister’s body, I observed the dissolution of the five elements, or tattvas (from earth to water to fire to air to space), particularly during the last week of her life. 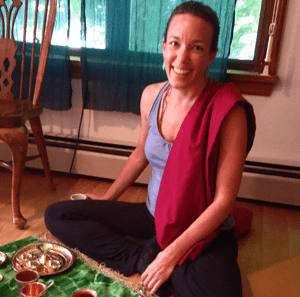 I was with her in the hospital much of the last week of her life until a few hours before she passed away. Her husband and my brothers were with her when I left to go home and sleep. She passed away a couple hours later.

During the past year as earth, which is associated with the sense of smell, dissolved, she gradually lost her strength and stability. She had always been very sensitive to smells, commenting daily on smells of people and things around her, but she just stopped talking about smells. She was often dizzy and her voice became a whisper. She felt as if she was sinking—but that might have just been the bad hospital bed!

She lost the desire for food and even the ability to eat the last couple of days. Eventually she lost all connection with the earth as she became unable to stand. Placing a hand on her forehead, knee, or sacrum, massaging her feet and hands, or simply holding her hand calmed and comforted her and provided some groundedness.

As water (associated with taste) dissolved the swelling in her abdomen and the edema in her legs and ankles became more severe. Two or three liters of fluid were drained from her abdomen daily to relieve the pain and pressure of the swelling.

The amount that she was able to drink and urinate decreased dramatically. Her mouth became dry and cracked and if you didn’t insert the straw just right into her mouth it would be painful to her lips. She constantly needed chapstick or a swab of petroleum jelly applied to her chapped lips. She also required an IV of saline solution the last week of her life.

She always felt terribly nauseous, almost like she was on the water. She lost interest in eating or tasting anything. The night before her death she was so dehydrated that she would cry as we were talking and move her hand to wipe her tears, but no tears would come out.

As fire dissolved, her arms and legs became ice cold, but she felt hot and kicked off any blanket or sheet. She felt cold in her lower legs, feet, and hands and forearms, but often had a very hot forehead. Her digestive fire was barely active, and it was hard and painful to eliminate food or even eat it in the first place.

On the afternoon of the day she died she lost the ability to swallow even a sip. She swallowed her last liquid meds with a cough. She was no longer able to speak.

Fire is associated with sight. Although her eyes were mostly open as her eyelids relaxed up, she could no longer see and her eyes were yellow with jaundice.

As air (associated with the sense of touch) dissolved in the final 24 hours, she was unable to speak except for one last time to remind us all with a whisper and a little smile (that looked like a smirk our grandfather used to make) that she could hear everything we were saying.

Her oldest daughter and husband had written all over the bathroom doors more than 200 words describing what she meant to her friends. The night before she died we read all those words to her, like “funfuckingtastic,” and we told her how much we loved her and that it was ok to let go. She really enjoyed listening to two live harpists who played in her room during her last few days.

In the last 24 hours of her life, her breathing changed and she started sucking air in as if she was thirsty for air. I closed my eyes in the hospital chair at her bedside as I listened to her “death rattle” breath that sounded like a snore on the inhale with an occasional moaning sound as the vocal chords relaxed.

In the evening of the night before her death, I counted the space between the bottom of the exhale and her next inhale at four seconds, and by the next morning that space had moved to eight seconds. Later in the afternoon on the day she died it moved down to six seconds. Her breath became more and more shallow as her lungs filled with fluid from the bottom up.

I could no longer feel a radial pulse before I left her side and her husband and other family members took a seat at her bedside.

As space, which is associated with the sense of hearing, dissolved, I whispered “I love you” in many ways, kissed her a few times on the forehead, and let her know it was ok to let go, hoping that she could still hear me.

I was not there with her the last two hours of her life, but I can only hope that she felt the limitless and expansive qualities of space as her sense of hearing also disintegrated as she left that painful body.

I love her always.