Meeting My Teacher for the First Time 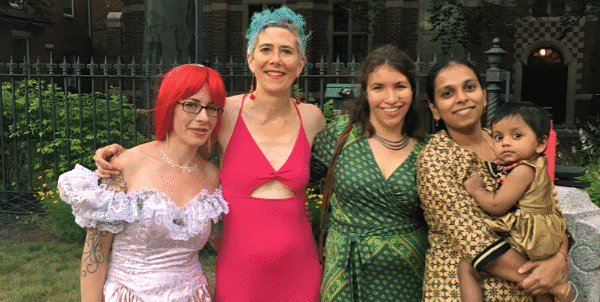 “Meeting my Teacher for the First Time” was written by Jaya Kula student Anitha Nagarajan.

I am Ani, a student from India of the Tantrik teacher, Shambhavi Sarasvati, and a devotee of Anandamayi Ma. I had contacted Shambhavi in 2011 because of my interest in Ma. Since then, we regularly communicated via email and Skype. Meeting Shambhavi was life changing for me. I was in extreme pain when I met her. Now, life feels far better, and I am not as crazy as I used to be, thanks to her generosity and kindness.

After a long struggle with my conservative South Indian family, I managed to travel to the States to attend the Tantra Foundations retreat in April, 2014. I didn’t know, and still don’t understand, how to relate to a Tantrikteacher. Meeting Shambhavi and the Jaya Kula community was totally a new experience.

Before leaving for the United States, I had imagined that I would cry on seeing Shambhavi. But when I met her, nothing of that sort happened. I only wanted to run away.

Meeting her over Skype was radically different from actually meeting her in person. There is a huge difference between watching a blazing fire on a video and actually standing right in front of it. I wanted a teacher who couldn’t sting me; I only wanted to feel good.

But when I met Shambhavi, I began to notice many of my fixations in her presence. One major problem was my inability to be honest and open. I longed to be with her, but at the same time I felt extremely uncomfortable to be ‘seen’ by her.

I used to feel happy when I heard her footsteps or voice, but I also told myself, “run Ani, run, she’s coming.” Half the time I stayed away from her, and at other times when I was sitting beside her, I kept my mouth tightly zipped. If I managed to say anything, I was only lying.

At one point, I stopped talking altogether when Shambhavi announced she was going to throw me out of the house where I was living with her and some other students.  She kept telling me that I have to be more honest with her. After that, I felt ashamed of the games I was playing and made efforts to be a little more open and honest.

Now, I understand that the foundation of a teacher-student relationship is honesty. This is the most important lesson I learnt in my three week stay at Kashi house.

I consider myself extremely fortunate to have been scolded by Shambhavi. Though it was painful then, now, when I think about it, I feel only love and sweetness in her anger. I want to be rebuked more and more, even though I am scared of being rebuked. I was struggling alone for almost three years. Now I have a community to rely on. I wish to see my teacher and my community again and work more deeply with them. Jai Ma.

PrevPreviousThe Yoga and Science Meme
NextUnborn in the U.S.A.Next
Return to
Blog Home