How I met Anandamayi Ma 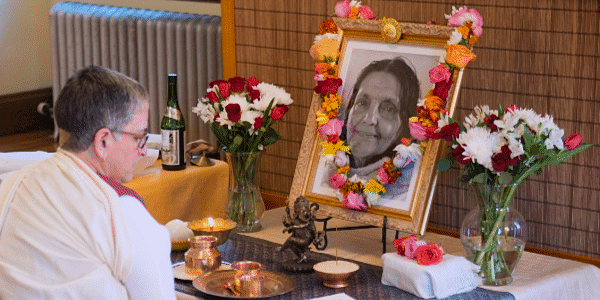 Try to make yourself a disciple. Only then will you find a Guru, the way to grace will open up and you will discover the stream of compassion. ~Anandamayi Ma

I have not told this story in full publicly. But I find myself living in a time and place in which many people are skeptical of or are rejecting the possibility of Guru. Other people long for a spiritual guide, but are afraid of being hurt.

For myself, I learned about the principle of Guru in my late 20s. I never doubted its value and necessity. I felt wonder that some people are equipped by Nature to help us wake up from conventional, constrained ways of being. I understood that the embodied Guru is an envoy of the fullness of Reality that I longed to see and express. I’ve always been a natural devotee of the Guru principle, and of my teachers who have embodied it. This natural devotion is what I am hoping to share with you.

I had two excellent teachers who were not Gurus before I met someone I could work with more deeply. That teacher initiated me and gave me the Sarasvati name. From him, I learned a lot of sadhanas, a lot about myself, and a lot about Guru.

One of the most primal and alchemical aspects of a real Guru-disciple relationship is that you have to see in your teacher what you wish to embody. I am not talking about superficial personality traits or style. You have to want to embody the wisdom and virtue you see reflected to you by your teacher. I desperately wanted my diksha (initiation) teacher to be that Guru for me. For many years, I tried to convince myself and him that it was so.

But it eventually become clear that he was not the teacher who could inspire me in this way. And so, I had to leave.

Before that time, though, in the early 2000s when I was still studying with my diksha teacher, Anandamayi Ma started appearing in my dreams. I didn’t know much about her. I had seen the occasional picture of her. I had never read or heard any of her teachings.

I was highly resistant to accepting that the Ma who appeared in my dreams was really Anandamayi Ma. She seemed to be indicating that she was my Guru. I had been taught not to take dead people as Gurus. Too much opportunity for fantasy. I still think this is good advice.

Nonetheless, each time I had a dream in which Ma appeared, I woke up in an extraordinary state. It was as if my body, energy and mind had been swept clean by a storm. I felt pristine, clear and sparkling with aliveness. I felt integrated with life and at ease in a way I had not experienced before.

Still skeptical, in January 2005 I set off for my inaugural trip to India. My first stop after landing in Delhi was Varanasi, the city of Lord Shiva.

One of Ma’s main ashrams sits on the banks of the Ganga in Varanasi, just north of Assi Ghat. I had no experience with ashrams or temples and felt timid entering either. Upon crossing the threshold of the ashram, a young Bengali man greeted me. He was not a sannyasin, but was engaged in full-time seva as an administrative assistant and science teacher in the ashram school.

We chatted for some minutes. He served me chai. I remember telling him that Ma was not my Guru. He looked at me incredulously and laughed.

At some point, he said, “You should visit the balcony. Ma always gave satsang there. Westerners never visit it, but you should go there. “ He pointed toward an external stairway leading up to the second floor.

I may have actually shrugged. But I walked up the stairs, admiring the panoramic view of the river. Reaching the top of the stairs, I discovered a spacious balcony and further on, the hall that bounded the ashram’s living quarters.

I stepped onto the balcony.

In that moment, the sky felt as if it had opened, and from it poured a river of grace directly into the top of my head. In the quote above, Ma says one will discover “the stream of compassion.” In that moment, I experienced the entire sky as a river made of endlessly flowing compassion. I remember looking up and seeing nothing but an infinite expanse of dancing, golden-blue light.

I felt a force and a shock of understanding and surrender moving through me. I stumbled a few more steps onto the balcony and fell to my knees weeping.

For the next hour, an utterly palpable intelligence and compassion poured into me. I wept without restraint. I understood it was Ma. I understood directly, incontrovertibly, that compassion is not something we “have” or “cultivate,” but that it is in the fabric of Reality itself. I understood that Guru is not different from that wisdom.

This is how I met Anandamayi Ma, and how I met Guru.

At home, I began to read Ma’s teachings and to consciously try to open myself to her presence. I learned that she lived in intimacy with her disciples and could be as ordinary in playing with them as she was extraordinary. I learned that anyone in any condition was welcomed by her. I learned that she never criticized or denigrated anyone, but that she could be a fierce teacher with those who were ready. I learned about, and felt, her limitless heart of compassion, like the sky on that day on the balcony.

I learned about Ma’s enjoyment of everything in our world from simple to grand. I learned of her endless curiosity about life in a human body, her skillfulness in understanding what is really helpful, and her breathtaking facility with language. I learned how she was able to suffuse a simple teaching with the grandeur of the absolute. I learned of her huge laugh and her ability to cry with and comfort those who suffer. I learned that she was fully established in the total equality of all phenomena and that birth and death were nothing more significant to her than puffs of smoke coming and going.

I wanted to discover Her in myself, in whatever way I could, no matter how limited, and ever since I have been guided by that desire.

Reflections on the Heart

Ma was not an ordinary Guru; she was an avatar, a direct emanation of enlightened wisdom. But every person functioning as Guru has in common with Ma, at least to some degree, the ability to help others to see, feel and come to embody the wisdom and virtues of which Reality is made.

The Guru functions to reflect compassion, mercy, kindness, curiosity, generosity, insight, intelligence, clarity, humor, devotion, precision, creativity, spontaneity, equanimity, and joy onto the mirror of your heart so that you can discover these in yourself.

Without this reflection, there is no Guru no matter how you may feel about a person on an emotional or practical level. The Guru function is not for mere emotional comfort, or to save you. It is not for earning approval, admiration or acclaim. Guru is not how much you love them, feel excited around them or can learn from them. When we discern we can learn from a teacher, we should do that, but it does not make them our Guru.

You have to ask yourself: Do I want to be in the condition I perceive this person as being in? Do I want to embody the virtues and wisdom that they embody? Is this person showing me who I want to become and who, on some level, I have always known I am? Do I recognize something of my enlightened self in my teacher?

If we orient to Guru in this way, making “mistakes” does not matter so much. If you see kindness and compassion in your teacher, but later on, you feel you have misjudged the situation, you still can have confidence in your desire; you know what you are looking to find in a teacher and discover in yourself. You already have proved you have some wisdom. Next time, you will do better.

If you have discovered within yourself the desire to become less limited, more free in your form of life, then it doesn’t matter if some teacher you have ultimately fails to support you in this. That desire itself is Guru. You will prevail. Guru will prevail.

Guru is the embodiment of the wisdom that you already possess but have forgotten. The Guru helps you to remember. Through discipleship to an embodied Guru, you are a disciple to the wisdom of your own Self, the ultimate Reality.

The Guru, appearing as your desire for realization, leads you to an embodied Guru. And the Guru in the form of embodied Guru will lead you through the many stages of waking up until you discover the Guru principle everywhere. Eventually, there is only wisdom, fully remembered. This is what I have learned from Ma, the heart of my heart.

If you are still reading this, it is likely that you already know something of the real meaning of Guru. Keep your eyes on the prize.

PrevPreviousGod has no Mission (so neither do you)
NextShakti Rises: Sex Abuse, Sexism and RenewalNext
Return to
Blog Home