The Monster’s Feet – a Dream Allegory

Last night I dreamt about a monster. In the dream, I recognized that I had seen the same monster before in other dreams. I understood who he was and what he would do.

At first, I was just observing all of this. Later, I began to feel afraid. I was trying to get out of the house where the monster was being feted as an honored guest. However, I was slowed down by numerous encounters with people in the house.

Eventually, I found myself face-to-face with the monster. He was massive—fat and shaped somewhat like a gigantic mound of mud. He sat on a throne accepting the devotion of those around him.

Thinking he might start devouring everyone at any moment, I tried to placate him. I slowly began to bow down to touch his feet. 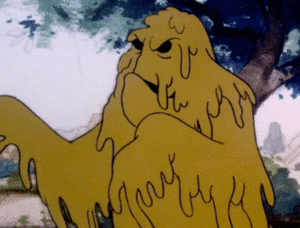 The teacher Swami Rudrananda said that whatever you are worshipping—with your actions and thoughts—is your God.

The day had been marked with scenes of students worshipping what would surely lead them the long way around toward walking out of the house of compulsion. I felt full of empathy, heartsore and helpless.

I woke up from the dream allegory. My own worship of the mud monster reminded me of a teacher I had in India. He tried to stop me from acting out of compulsion. But when he saw that I was not going to take the short path by listening to his counsel, he changed tactics and enthusiastically agreed to help me feed my fixation.

Why? In effect, he slowed down to walk with me on the path of fixation. But I’m certain that this was an act of compassion. I’m certain that by assisting me in this way, he hoped I would come to the end of that path more quickly.