Should We Eat Animals? 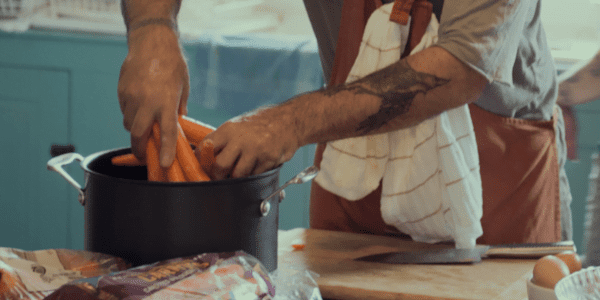 In the ancient, Vedic view, all life is food, and everything and everyone is eventually eaten. Only those who rediscover the timeless continuity that pervades existence become immortals and escape the endless round of dining, diners, and dinner.

The Tantrik tradition of Kashmir Shaivism teaches that there is nothing but Shiva consciousness and its power of creation—Shakti. No matter how aware or unaware some aspect of our world appears to be, everything is consciousness and energy.

While we normally distinguish between sentient and insentient life, from a Tantrik perspective, a more exact formulation would be to say that a table or a rock is simply more ignorant than a cat or a person.

Ignorance means operating from the perspective of a limited View. Your toaster may be extremely ignorant, but it is still consciousness and energy.

Having embodied these insights, or having experienced them embodied in our teachers, there is no reason to distinguish between eating plants and animals based on the View that there is some radical difference between them, or on the chauvinistic belief that human beings are “better” and can demonstrate this by not eating other creatures.

Most important when considering the question of should we eat animals is the wisdom of Ayurveda that teaches us to ask: “For whom and when?”

This means that any particular course of action or prescription must be subjected to two questions. For whom is this intended? And, does it suit the circumstances or the times?

The question of whether or not to eat animals needs to be examined from the perspective of each person’s condition and circumstances. For instance, people who have certain constitutions or health conditions, or who live in certain climates, or in places where there is not a wide variety of foods available, must eat or not eat animals accordingly.

A yogi, also, may be vegetarian at some points and not at others depending on the type of practice being undertaken.

On a different level, in more ancient, or simply more respectful cultures, animals were hunted, herded, and killed using methods designed to minimize suffering, waste, and the destruction of eco-systems.

As practitioners on a Tantrik path, we are working toward relaxing our tensions and entanglements. We want to discover more freedom and to participate more fully in the fundamental capacities of Reality, such as compassion. Because of this, we must try our best not to harm ourselves or others. We don’t want to increase suffering. No one can avoid karmic entanglement, but we try to not create new problems for ourselves as much as is possible.

So, even if we eat animals, we try not to buy meat from animals who have been mistreated or killed in a way that would cause further ecological degradation.

Eating anything is a form of conversation and exchange. This can occur with respect, understanding, and a proper devotional attitude. Or eating can be an act of ignorance and harm to self and others.

The question “for whom and when?” also applies to the larger state of our world. Right now, human beings are participating in the suffering and extinction of animals on a massive scale. New information comes out every day about the loss of entire species and the effects of the rampant misuse of the planet on animals, including human beings.

Sometimes people who have only a conceptual understanding of the state of continuity of our world feel that if everything is just consciousness, then why bother about suffering or karma.

This is a dualistic attitude, despite the fact that it sounds like ultimate nondualism. Every expression of our world is a fact. Nothing can be discounted. Our own suffering, and that of others, is real from the perspective of its own level. Everything has validity when seen from a certain perspective. To be able to act appropriately at all levels is to be fully human.

There is a famous story about Anandamayi MA. She ordered her disciples to dig up a newly-laid cement walkway at an ashram because she heard a plant that was buried under the cement calling for help. The disciples dug up the walkway and rescued a young pepper plant from suffocation.

Of course, MA ate vegetables and walked on grass. But in this moment, she found it appropriate to answer a call from a suffering being. For whom and when.

For the past year, I have been eating fewer animals. This came about gradually. I also began to have a series of dreams in which various animals appear. Sometimes they speak to me telepathically. At other times, they just want companionship. Or to give me a gift.

A friend asked me why I had largely stopped eating animals. At the time, I really didn’t know.

Then, the other day, I read about a large-scale study of commercially-harvested, wild ocean fish. A worldwide team of scientists has determined that these will be gone in fifty years.

I realized in that moment that I have stopped eating animals because I want to express something to animals. The change in my eating habits is part of a conversation with animals. Animals are suffering, and I want to say yes, I feel this. I want to send animals messages of love. I want to stand with animals.

I also want to stand with beauty and amazement. My expression of not eating animals arose spontaneously in a world of manifest expressions. The precision and diversity of these expressions is a gateway for human beings to experience the open, uncontrived, natural state.

When we encounter the diversity of our world, when we interact with the profusion of animal life, we enter into beauty and amazement. In this sense animals are our teachers. If you think about your attitude as you are watching animals, or about the faces of both children and adults when they are watching animals, you know immediately what I mean.

Through my dreams, I’ve learned a little bit about the consciousness of animals. Each one has such a different flavor. Contacting other forms of consciousness is like discovering a whole new level of texture and color in the world. There is palpable grief when we lose diversity of expression to brute ignorance. I mean the brute ignorance of human beings. So I am also expressing grief.

Even if we continue to eat animals, we can still communicate to animals through ritual and intention. We can buy, cook, and eat our food as an offering of nourishment and beauty to all beings, including animals.

We can try to relax our defensiveness and allow ourselves to feel more fully the real condition of the beings with which we share our world. We can offer this to animals.