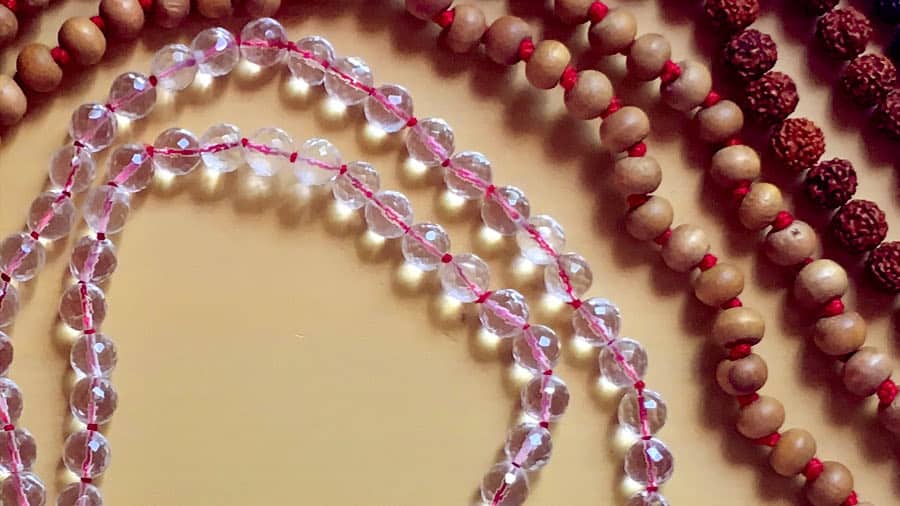 Shambhavi talks about subtle and gross experiences with mantra, effortful spiritual practices, and using intensity as a defense mechanism. A podcast from Satsang with Shambhavi

Live satsang is mostly free range Q&A. “Tastings” are special episodes of our Satsang with Shambhavi podcast where you’ll get to listen as students ask all kinds of questions and Shambhavi responds. Welcome to the buffet version of satsang!

STUDENT 1
When we just mouth mantra and not make any audible sounds. And let's say we are still feeling like the strong vibration of the mantra. I'm just curious, like, how does the mantra have the vibration when we are not mouthing it? Like that grain, you taught us about the grain of the mantra. Have some grain in your voice. After a while, you can hear the grain.

Puja is accessible too, but particularly when it's out of its Indian context, there's just people who don't want to play that way. Right. But mantra is very accessible to most people. And of course, there's so many different kinds of mantras that you can basically always find something that someone's going to enjoy doing.

And you can really literally feel that vibration in its grossest form and connect with it, and it very quickly—if someone does mantra every day—very quickly begins to erode that sense of separateness at the boundary of our skin.

It starts to make us feel like our body somehow doesn't end here after doing mantra for not really even that long. Not that we'll remember that when we're out and about, but at least we'll have that experience.

So the mantra has subtle forms that goes through all the subtle levels of speech, back to unmanifest speech and included in that mantra, like, if it's a deity mantra, like the deity is part of the mantra also. The mantra is the mantra body of the deity.

So this is why it's possible some people are really into deity worship. Sometimes people see deities appear before people and have conversations with them. This happened to Bholonath with Tara at Tarapith.

Everything just becomes more and more subtle. But that's good if you're experiencing that, are you or just reading a book?

STUDENT 1
I found it only on a walk one day, and that day I wasn't mouthing it, but maybe counting it, I want to speak it out loud on most days.

SHAMBHAVI
Right? And it's modest and smart to do what is actually what you need to do. So some people get very titan-y about their spiritual practice if they hear that—oh, doing it silently is more subtle. And they just start doing that even though they're completely not ready to do that.

And then it's good to go back and forth to play it intuitively. And also, if something starts arising when you're practicing, like you're going along, this is just sort of usual. And then suddenly—oh, wait, I'm feeling this vibration more profoundly than I normally do.

This is how we actually progress.

That's what we need to do in order to progress.

STUDENT 1
It's like homework. You get homework from wisdom.

STUDENT 1
When you don't do it, you can't progress.

SHAMBHAVI
Exactly. You can have one off experiences. Someone will say—oh, I felt such and such in my practice. And then what? Did you follow it, or did you just sort of catalog it?

Oh, I have something I can tell Shambhavi, yay [laughs]. But as Rudy said, when we have spiritual experience, that's a work order, right? That's our homework. We have to then do our part.

STUDENT 2
I was wondering if you could talk about the Guru bead. I can't remember why there's a Guru bead and what the significance is.

SHAMBHAVI
Well, you need something to tell you when to turn around [laughs]. So it's practical. Right? And you can maybe read something into that if you wanted to. The other name for the Guru bead is Mount Meru, which is a mountain that is supposedly the center of the human realm.

You know that when you do 108 feeds, eight of them are for your teachers and other people, and 100 of them count towards your practice. So if the teacher says, do 300,000 mantras or 100,000 mantras or a 1,300,000 mantras-these are like, common numbers of mantras that teachers will tell students to do.

It's like these little charts you can look up. These are particularly for this practice called purashcharana, which is when you first get a mantra and you do 100,000 in nine days and then 10,000 on the 10th day. These little charts will tell you how many mantras do you have to do in one day in order to finish the purashcharana in ten days?

It's fun to play with that stuff, I think anyway.

STUDENT 1
In the original purashcharana, is there puja?

SHAMBHAVI
And the last day is yajña. So you make 10,000 ghee offerings into a fire and 10,000 mantras, which, depending on how long the mantra is, can really be a chore.

SHAMBHAVI
Just Om Ma, you're in luck. Anything longer than a few syllables really takes a long time. I think very few people do this anymore. We're just sitting around singing kirtan. They say that's the best sadhana for the Kali Yuga.

STUDENT 3
Why do they do that?

SHAMBHAVI
Why do they do purashcharana? In order to establish a relationship with the wisdom of that mantra in a very short period of time. There are some swathes, some streams of Tantrikas who like to do everything very quickly. I used to be one of them, but I'm not anymore.

STUDENT 3
So you did it in the past?

SHAMBHAVI
Yeah. I used to like doing those more extreme things when I was a youngin'. I was very titan-y about it. Now I'm still titan-y, so I call it the fact that I'm not doing that anymore lazy. That's a very titan thing to do.

STUDENT 4
That's something I kind of notice how titan existence is very uneven and very spiky. Like, energy is very spiky.

SHAMBHAVI
Yeah. And like pumping yourself up with coffee so your spikes last longer.

STUDENT 4
Yeah. Like, for myself wanting to have more of a smooth existence.

SHAMBHAVI
It's a good thing to have a more smooth existence. Would that be great if that was what people thought of as a successful life?

STUDENT 5
I've been thinking about my intensity too. I trained myself to become intense, and then underneath, everything is scared and trembling... I convince myself I am strong in some way.

SHAMBHAVI
Yeah. You are strong now, but it's not because you're intense. It's because you have incredible endurance.

I feel like that strategy did help me survive my childhood, that anger that I had and the way that I just kind of said—no, I'm not going to let anyone stop me, and I'm going to keep going—really helped me in my childhood. But then at some point it becomes inappropriate. Like you're no longer in that childhood situation, you're in a whole other situation.

And if you're still using those strategies, then you're using strategies that aren't really appropriate to your actual situation at some point when you get older.

And I remember recognizing that at some point—oh right, these strategies worked when I was 15, but they aren't going to work now. They aren't appropriate for now. And I have to start relaxing that and letting myself feel more vulnerable. Maybe you're recognizing some of that.

STUDENT 5
Yeah. I'm just worried that I will have no entertainment without my intensity.

SHAMBHAVI
Oh, yeah. It is entertaining, isn't it? Well, that's very insightful of you to recognize that. Sure.

But we have those kinds of fears along the way, and they are always unfounded. We do entertain ourselves in different ways with our drama. I have— had an aunt, my mother's sister, who was incredibly over dramatic. But you could tell it was total self entertainment. She would actually be watching herself doing it.

She had been a ballet dancer at some point when she was really young, but then she got married and gave up dancing. But she would often just kind of sling a hand into the air and say something really dramatic. And then she would look up at her hand. She was enjoying her own gesture.

What happens is when we start to give that stuff up or the energy starts to smooth out, or just kind of, our energy kind of ratchets down to a more sane level of expression. We go through sandhi where things seem kind of bland or we feel like we're not feeling much.

We feel kind of numb because we've stopped feeding ourselves all that intensity. But we haven't started listening to the subtlety yet.

And then eventually we recalibrate, our energy recalibrates. And then we notice all the life and all the feelings that gross intensity had been drowning out.

I like to compare it to going to the desert.

If you've been living in a noisy environment, and you're just in a regular, like a city or something, and then you go to the desert, it sounds so quiet that you hear buzzing in your ears. The silence actually becomes deafening.

Then if you sit in the desert, you kind of quiet down and then after a time, you start to hear all the quiet sounds of the desert, the quiet life of the desert. And you feel how lively it is when you would never have noticed it before.

It's one of the secrets of success of spiritual life that we recognize these interim periods when we're moving from one way of being in the world to another and we're recalibrating. And that can be very unsettling or even boring or bland. And we have to recognize that that's what's happening and just keep practicing. And then eventually everything does recalibrate, and we learn that that's just a regular process that happens.