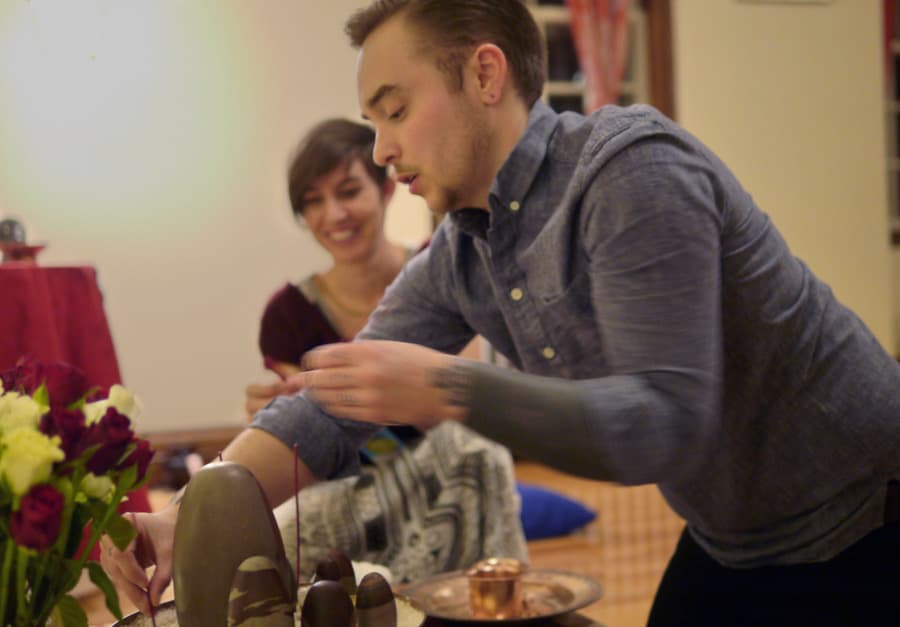 Shambhavi riffs on precision as an aspect of kindness and care and how contriving intimacy doesn’t resolve the problem of our loneliness. A podcast from Satsang with Shambhavi

STUDENT 1
I would like for you to talk about precision versus perfectionism.

SHAMBHAVI
So perfectionism—anything that has an ism on it is a fixation or conceptual way of being. So perfectionism is about reassuring oneself that you are not making a mistake and that you will not be yelled at or disparaged in any way. It's an attempt to ward off criticism through being perfect.

Many people actually have been attacked, so one possible response to being attacked is to try to—if you're heavily criticized, is to try to be perfect in whatever you're being criticized about. That's one kind of response, and that, of course, leads to some kind of perfectionism.

Being precise comes from a feeling that you want other people to have the best experience.

So precision is a natural outflow that doesn't really require—it requires effort, but it's not tiring effort. Most people think, well, if I have to be really precise, it's going to be exhausting. But if it comes from the heart, if precision comes from the heart and it's just an aspect of kindness and love and respect, then it really is not the kind of effort that is exhausting.

It just comes out through a natural desire for other people to have the best experience. That includes, for instance, for me, my respect for my teachers and the traditions that I've studied, and I try to convey them as precisely as possible and as honestly as possible.

So that comes from wanting you all to have an experience that I've had to benefit. That's why I'm not sloppier, or not taking the time to do things in a precise way.

So perfectionism is self focused and, in the best possible circumstance, precision is other focus, and it's an aspect of kindness and care.

STUDENT 1
I do try to have a bhava of hosting, even if it's for myself. I think of hosting myself in my own house. And today my house is in disarray, and I'm just like, I just want to rest. And I feel like I'm doing something wrong by resting when it's like this. And I know that that's perfectionism.

SHAMBHAVI
Yeah, I think it's okay to take a night off. You don't have to have everything be perfect before you go to bed. And every now and then, you can just leave things until the next day. And that's not a disaster.

And maybe you could also enlist some friends who are living with other people to maybe come over and help you every now and then. It is hard to keep a space all by yourself. That is a lot of work, and it's a lot of repetition, no doubt about it.

STUDENT 1
It's funny that I just need to hear you say that.

STUDENT 2
I've been noticing something about how I use my attention and that a lot of my energy is in my head, obviously, kind of brooding energy. And I just sort of stopped and started asking, what do I want to pay attention to?

SHAMBHAVI
Where did you find you wanted your attention to go or didn't want it to go?

STUDENT 2
It went to a lot of just very basic sensory stuff, like I went to the rose garden and just sat there and watched people and it's like there was nothing I was trying to accomplish and that felt really different and kind of expansive.

So while we're worrying, we feel some sense of connection, and that, especially now when people are feeling such a difficulty connecting often, that this constant ruminating on other people in our relationships and circumstances is taking up a lot of space.

But this is not where we actually find connection.

We get so deeply into whatever we're thinking about that literally 90% of the rest of the world goes away. And then we were in a state of insensibility, brought on by our own thinking and worrying. We lose touch with that loneliness.

But in the process, we lose touch with everything.

So it really doesn't solve anything at all. And the only thing we can do is allow ourselves to feel our real circumstance. And then through that, we could get in touch with living presence and other people.

What happens when we let ourselves actually just feel the condition we're in? For many people that's loneliness or fear or whatever it is—is that it moves us toward greater intimacy with people and more vulnerability, more openness. And then, either temporarily or permanently, our condition of feeling separate is going to end.

So let's say that we're in the state of semi- or near total insensibility, and we meet another person, like we go out with somebody or somebody comes over, or we find the love partner we've been looking for, or something happens. Still, in that state, we aren't actually establishing a very deep intimacy.

We're just kind of going through some motions and some habitual ways of being. Or there's so many different forms of insensibility that look like we're living, but we're not actually living. The catalog would be infinite of how this shows up, right?

Because we're still running away from how we actually feel. And until we are showing up as ourselves, we can't actually be intimate with anyone. And that often means letting ourselves feel and be seen in pain.

You can't just run away from pain. It doesn't work that way. It's all connected.

One of the blessings is that I just let it happen. I didn't try to fix it, and at times it was like minute by minute excruciating. But I think in the end it really served me to just let it happen and to not be in relationships that didn't speak to me in some way, in a nourishing way to not have, like, filler relationships.

And also, as I got older and started practicing, recognizing how much of any kind of performance of personality was getting in the way of intimacy, even if it was a happy performance.

I had an experience recently on an online community that I'm part of where somebody said something and it was very funny. She didn't mean it to be funny, but it could be interpreted as funny, and I just got into one of my happy hijinks moods and responded in a very high handed hijink-y jokey way, and I realized that it actually really hurt her and was off putting.

But I was having fun, but I didn't notice the bigger context for things. So I apologized, but even if we're doing what we do, that's just sort of our personality, it can cut us off from really feeling for others and really being connected to what the bigger situation is.

Whether it's a rose garden or a walk with your teacher to the supermarket, whatever it is, as long as you're lost in some other attempt to be intimate, then you're not going to be. It's going to be disappointing every single time. You're going to feel emptier and lonelier.

You don't have to be anything other than what you are.

So it can entail being in tremendous pain at times, especially if you're living alone and it's the pandemic, or if you're just lonely anyway. Everyone's lonely until we make that connection with living presence to some degree or another.

But of course, having actual friends, that one feels intimate with is very nourishing. But how can we feel actually intimate when we're pretending all the time? So be in the rose garden all the time, whatever is happening and whoever you're with.

It's a tall order, but nothing will be resolved until you do that.

Sometimes I have to say to students, after saying the same thing over and over again, for years and years and years, you're just not going to be able to keep doing things the way you've been doing them. You have to take it really to heart that this is what reality is like.

All the ways we try to connect with each other that are kind of contrived. And then we go home feeling like [uughh] something's missing, something's wrong. But we spend our whole lives wrapped up in some worry about something, and then we wonder why we're lonely and depleted.