Can a Woman be a Crazy Wisdom Teacher (and get away with it)?

Crazy wisdom is at play when a spiritual teacher embodies uncompromising compassion paired with over-the-top creativity. These powerfully and magically transfigure the scene of teaching in order to help students to wake up.

Crazy wisdom is a “by any means available” situation. Some of the moves associated with crazy wisdom are rapid pivots from tenderness to fierceness to hilarity, or just fierceness in general; acting in ways counter to the expectations that students have of spiritual teachers, or generally provoking, or scaring or shocking students; refusing to treat anything as nonspiritual, a.k.a. using every and any circumstance as a vehicle for practice; and energetically engaging students in the wild creativity that is fundamental to existence.

Although Chögyam Trungpa Rinpoche coined the phrase, stories about crazy wisdom teachers are a part of the spiritual inheritance of every direct realization tradition. Even in the absence of a specific crazy wisdom teacher, traditions offering a more direct approach to self-realization, such as Dzogchen, Trika Shaivism, and Chan Buddhism, naturally embody crazy wisdom in their teaching methods to some degree.

For instance, both of my traditions, Trika Shaivism and Dzogchen, deploy specific sharp mantras to induce mild shock and clear conceptual mind. They also feature a more playful, unpredictable, and fierce style of teaching. I heard this memorable aphorism during a teaching with the wonderful Kagyu meditation master, Lama Wangdor. “When the lion of Mahamudra roars, many are scared off. But the cubs come running for the milk.”

Crazy wisdom isn’t a method in the sense that you would adopt anything or get a crazy wisdom certificate. Crazy wisdom flows effortlessly and without contrivance into a teaching circumstance as an expression of primordial compassion and its happy hijinks.

I’ve had one teacher who was a full-on crazy wisdom guy and another who less successfully attempted to adopt a crazy wisdom persona for egoic reasons. For myself, I’m kind of a lazy crazy wisdom teacher. Or maybe I’m a soft crazy wisdom teacher in the way that someone might be a soft butch. I definitely have leanings. But full-on craziness takes energy of a certain quality. Sometimes I can’t be bothered to play that hard. Other times, it just happens. 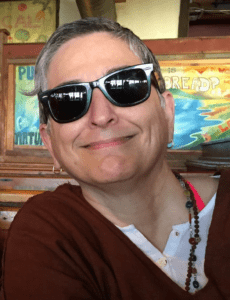 I spy with my little eye.

I have long wanted to write about being a female spiritual teacher, especially one who is a bit fierce, a bit gender-bendy, allergic to anything smacking of the holy-schmoly, and scariest of all: uncompromisingly non-seducible. Yes, nearly all students try to seduce teachers, most often with praise and faux devotion, and then if that doesn’t work, disapproval.

All students come to teachers with expectations and rules in hand about how teachers are supposed to show up in their demeanor and behavior. A few of these rules are good rules, at least much of the time, such as that teachers should be open to scrutiny and questioning. But most of the rules are just expressions of students’ limited understanding and psychological needs. In the direct realization traditions from Tibet and India in particular, it’s the teacher’s job to frustrate these expectations because they are almost always born of limitation. It’s just that it’s more acceptable for a male teacher to do his job.

I’ll just state the obvious. People are more okay with the outrageousness, the fierceness, the directness, and the unpredictability—faked or authentic—of male teachers.

As a woman teacher, you are supposed to be motherly and nice and conventionally encouraging. You are supposed to give credence to the expectations of students and play by a largely conventional and gendered set of “rules.” You are supposed to be available to be touched at any moment. Many, many times, students have physically rushed me with full-body hugs. They have thrown themselves wholesale into my lap and kissed me on the lips without any thought as to whether this was appropriate behavior, mutually desired, or well-timed. I have threatened, semi-humorously, to get a tee-shirt printed with “I am not Amma.”

When a woman teacher doesn’t play by the rules or refuses to show up in the costume of her assigned role, a whole lot of nastiness can ensue. And if she dares to raise the issue of students’ gendered responses to the teacher, nastiness can occasionally turn into out and out intent to harm. I’ve experienced all of this in my life as a woman spiritual teacher.

I was once told by a student that it bothered her that I didn’t push my chair in after leaving the dinner table. Another student went into a paroxysm of righteous anger, saying she didn’t like my tone when I declined to engage in a personal conversation with her after a long day of teaching. Yet another declared herself forced to deal with my ‘lack of integrity’ because I didn’t pass on some information about a service task according to her timetable: a matter of hours, it turned out.

On other occasions, new women students in particular have taken up the role of teacher and spoken reassuringly to another student in open satsang when they clearly felt I was being too direct. I have also been literally commanded by a student or two to speak to them only in a certain way of their choosing. On one particularly memorable occasion this occurred in reaction to my raising of the issue of male privilege and how it operates in our community. 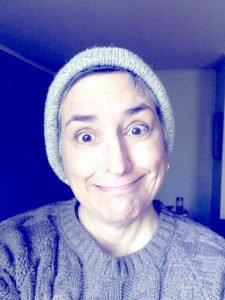 I can’t imagine any of the male teachers I’ve worked with being taken to task for such minor, perceived breaches of etiquette or for speaking to their students directly without softening observations with reassuring language.

What would happen if I drank like Trungpa or screwed around as many male teachers have or lied or made students wait hours for teachings or treated my students to some of the tongue lashings and withering looks I’ve received from my teachers? I dunno. Maybe I should try it just to generate a more appropriate sense of scale.

What may present both the biggest obstacle and the biggest opportunity for some students is their discomfort when confronted with a woman teacher who does not express tentativeness about herself, about what she knows, about what she observes, or about her actions. Actual confidence in a woman is a trigger for a subset of students.

Even the teacher’s playful self-enjoyment—a hallmark of every realized or semi-realized teacher I have known—can elicit a negative reaction. Encountering a woman who simply does not feel any self-loathing can be read as arrogance or met with a mixture of skepticism and unacknowledged longing, particularly from women students.

Fundamentally, the conventional role of “woman” is directly at odds with the job description of spiritual teachers in the direct realization traditions.

My students and I talk relatively often about gender and sexuality. Next to our basic experience of being separate from others, gender role karmas and karmas related to sexual expression are the most universal and entrenched patterns that we deal with as human beings. Since we are trying to release conditioning, freeing ourselves even a little from the grip of karmas associated with gender and sexuality is important. If students are willing to look at the expectations and longings that inspire their gendered responses to a teacher, it can be really liberating. 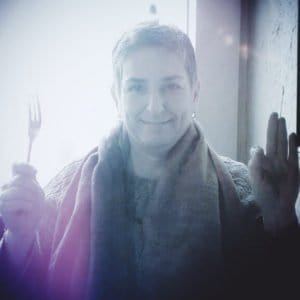 I’ve also considered that a little bit of sexism may be a good thing when it comes to female spiritual teachers and their students. From what I’ve seen, all a male teacher has to do is advertise some actual or fictional spiritual provenance, don some spiritual clothing, and/or talk and move in some recognized “spiritual” fashion in order to be presumed accomplished and deserving of respect, if not adulation. A certain layer of fantasy or automagic benefit of the doubt accrues to even minimally kitted out male teachers.

But as Abhinavagupta, the siddha of Trika Shaivism taught, only students who doubt are teachable.[1] Doubt is an open, curious, questioning approach to learning. When doubt is suppressed, learning is delayed. Students are more likely to doubt, and to express their doubts to, a female teacher. This is especially true in a crazy wisdom situation which tends to encourage more openness from students. Students are far less likely to project non-existent spiritual accomplishment onto a woman teacher. This makes room for a process to take place in which the real richness of the relationship can be discovered by students, and they can have more confidence.

At other times, gender karmas are so strong that skepticism can ruin or greatly detour a student’s ability to learn from a woman teacher. I have encountered a student or two who just cannot shake the received idea that spiritual teacher=man or who cannot engage fully when the chase after male approval is not at play.

At the end of the day, I feel grateful to be privy to the gendered ravings, and ravings about gender, of my students. We get to look in the messy, dark, hurting places together. We get to work with what, in most teaching situations, is hidden and unapproachable. This has been of great benefit both to myself and to my students, many of whom find it hugely relieving to be able to acknowledge and not be judged for the feelings and experiences that structure their lived sexuality and what we call gender.

Sometimes the going gets really tough, and the only remedy is silently expressed patience and love. As I’ve told students who have had particular trouble with aspects of this: I’m just going to keep on being myself. And this means that my students and I will continue working together to answer the question “Can a woman be a [lazy] crazy wisdom teacher (and get away with it.)?” For most of my students, the answer is already “yes.” For others, the jury of ordinary karma is still in closed session and deliberating.

I’ll leave you with one funny, lazy, crazy wisdom story. A fellow came to satsang in Portland, Maine. Afterward, he approached me. “I’m looking for a real Tantric teacher,” he said quite earnestly. “Do you know of any?”

I looked at him, smiled encouragingly and answered, “Sorry, no, but feel free to keep coming to satsang as a stop gap until you find him.” 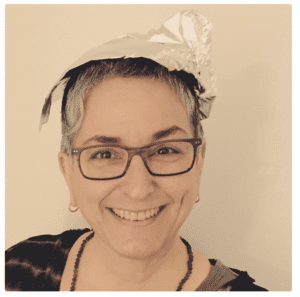 Ready for the apocalypse.

P.S. I’ve quite often been told by students not to publicize the photos of me included in this article because they might make some people feel uncomfortable. We wouldn’t want that, now would we?