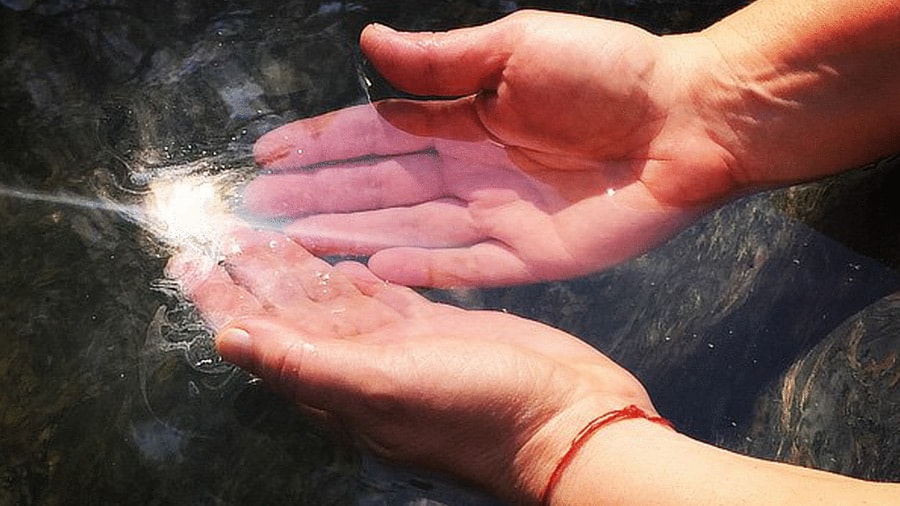 If you think you are manifesting everything in your life, then manifest a solid gold egg right now!

Somewhere in the world are yogis who actually can make things appear and disappear, including themselves. It seems unlikely that one of the readers of a Jaya Kula blog post is such a yogi. But if I’m wrong, please write to me immediately and let me know! (Grin.)

This polemic has been inspired by a recovering new agey student who asked me yesterday, “Is it really true that our thoughts are not producing our whole lives?” Well, yes and no.

To understand the question above, we must simultaneously think in both relative and absolute terms, or in dual and nondual terms.

Sadly, a conceptual understanding of this will not help you to get rich quick. We can’t escape our real situations by running off and hiding out in absolutist nondual explanations.

Rare adepts work directly with the natural capacity of essence to appear with form and then dissolve again into the ocean of formlessness. This pulse between appearing and resolving back to formlessness is the entirety of the life process. However, no substances actually appear and disappear. Everything remains just as it is, was, and always will be: consciousnessness and energy. Only the mode of appearing changes. An adept is experientially participating in the foundational processes of creation.

Doesn’t the ability to consciously participate in the cosmic creative process of appearing and dissolution seem an eensy-weensy bit out of most of our reaches? Might it possibly take more than a handful of thought-redirecting aphorisms to recreate your whole life?

Well, the really horrifying thing is that your thoughts are co-creators of your life, but mostly unconscious and compulsive co-creators. Most of our thinking is Shiva Nature expressing in a playful state of avidya or ignorance. That is, Shiva appearing in a self-forgetful mode. This self-forgetfulness is part of the cosmic game of peek-a-boo, and self-realization is the “I see you” part.

Consciously redirecting energy, including thoughts, is part of some spiritual paths. This is good, but only one who is largely free from karma, or habitual patterning, can play deeply with processes of manifestation and dissolution. And if you were that awake, you might not waste your energy being so controlling.

Sometimes spiritual seekers who have met a teacher make claims such as “I manifested my Guru.” This is, frankly, absurd. Perhaps your emerging capacity for spiritual work became evident to a teacher so he or she showed up. Perhaps an entire cosmic situation at work long before your birth was tending toward that meeting. But if you, on your own, were capable of manifesting a teacher, then you likely don’t need one!

Your best companions on the spiritual path are sincerity, humility, and a high tolerance for the unknowable. Even for the adept, the world is only somewhat more useable, somewhat more consciously perceived. You will never be able to control the whole thing. Which is great, because now you can relax all that effort and keep on with some good, ol’ fashioned daily practice. Meditation anyone?