Devotion is the ocean into which all streams of wisdom virtues resolve.

Devotion is the supreme wisdom.

A realized person emits this perfume in every gesture, and its single attribute is total perfection in actions and non-actions of creation, care, and destruction. 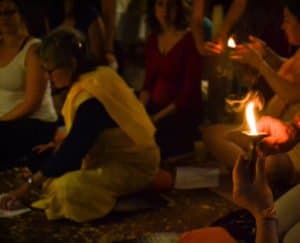 It is not possible to self-realize without discovering and embodying devotion.

Primordial devotion is not looking up or down.

When there is still a question, or concern about devotion, one is still experiencing separation, pride and self-defensiveness.

Both the dependence on and the distaste for the play of supplicant to master are based on experiences of lack and inequality. Devotion based on a desire to be saved, or used as a strategy for gaining admiration or avoiding criticism is a detour.

Your expressions of love and reverence float over your body and mind like gusts of wind. Unless the innermost chamber of your soul is opened to allow a free flow of true devotion how are you able to offer something real rather than a mere semblance? ~ Shree Shree Ma Anandamayee

Primordial devotion flows from the wisdom heart, the innermost chamber, like honey from the hive: it is the essence of amrita, the nectar of immortality.

The wisdom heart’s wisdom is that of the total equality of all phenonmena. One naturally assumes the attitude of the devotee to all – to a saint, a sinner and equally to an insect, a lamp or piece of wood.

Devotion is embodied self-knowledge reflecting itself and on itself through infinite, expressive phenomenal worlds.

Devotion is the craft and the stuff of world-making.

Devotion is all activity and all feeling and all understanding of that.

We are made through devotion and we are devotion, through and through.

PrevPreviousUnborn in the U.S.A.
NextAmerican Mahatma vs. the Greatness VirusNext
Return to
Blog Home